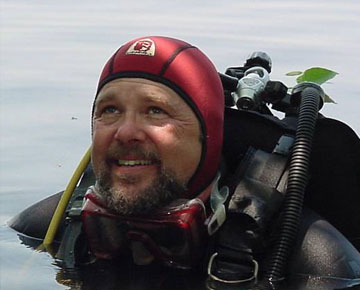 Nathan is a native North Carolinian and is an Assistant State Archaeologist and the lead conservator with the Underwater Archaeology Branch's (UAB) preservation laboratory. Initially hired in 1997 as the lead conservator for the Queen Anne's Revenge (QAR) Project, he has logged hundreds of hours as an archaeological diver excavating and recovering artifacts from the underwater site. In addition to his work on the QAR, he has worked on dozens of shipwrecks in the US, particularly Civil War shipwrecks in North Carolina's inland sounds and rivers. His primary research interest involves artillery and the material culture relating to ship’s armament.

Nathan came to work at UAB after years as a marine contractor and has a degree in marine construction engineering from Cape Fear Community College. He has a BA in anthropology from Univerity of North Carolina at Wilmington and received training in conservation and underwater archaeology at East Carolina University. He is a member of the OSA scientific diving program.