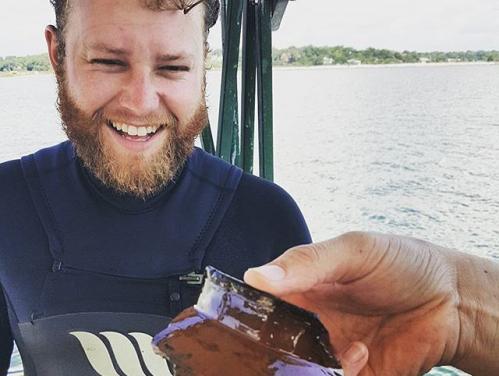 Hailing from the University of West Florida, Stephen Atkinson began his career in maritime archaeology while excavating and conserving the artifacts from the Emanuel Point Two Shipwreck. While in Pensacola, FL, he also participated in locating, mapping, and excavating numerous other wrecks from the 16th to 20th centuries, from ships of discovery to the sidewheel steamers of the industrial age. He has worked on various terrestrial projects as well, from Roman forts in northern England to prehistoric caves and historic cemeteries in Florida and Alabama.

After serving as an archaeology intern at the Warren Lasch Conservation Center in 2016, digitally recording the H.L. Hunley, Stephen’s career with OSA began at the Queen Anne’s Revenge Conservation Lab, where he served as a conservator. He then transferred to the Underwater Archaeology Branch in Kure Beach to become an Assistant State Archaeologist in the fall of 2019 and is a member of the OSA scientific diving program.

Stephen is originally from Jensen Beach, FL, and has a BA in history from Stetson University and an MA in historical archaeology with a maritime focus from the University of West Florida.