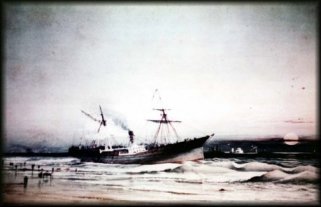 The Civil War came at a time in history when great technological changes were taking place in maritime construction. The two major innovations were the use of the steam engine both as a primary means of propulsion, and as a supplement to sail and the use of iron in hull construction. Great Britain was the major country involved in developing these new techniques though the United States, and the other European powers, were to a lesser extent also experimenting with and changing their ship designs.

For many years British ship makers had experienced increasing difficulty in procuring an adequate supply of high quality timber with which to build ships, particularly oak. By the second decade of the nineteenth century iron manufacturing had developed to the point that it became economically and technologically feasible, in England, to use iron in the construction of ships. Along with this trend was continued development of the steam engine and its use connected to a paddle wheel or screw to power ships.

The first iron steamer was the "Aaron Manby" built in England in 1821. From that time on this was the trend in Great Britain and by 1860 there was no question in England that the new large iron screw steamers were more desirable than either American or British built wooden ones.